Addicted, Deserts, and Comics. No relation.

On Monday, I finished the rough draft of my current project, The Freezer. Hooray!

When I'm not writing, I feel demotivated from doing anything. I feel blah. Directionless. Since I started writing seriously—what was it?—three years ago, every aspect of my life has grown brighter and more defined, like turning up the saturation and contrast on an old TV. I can't even begin to understand why. I feel like writing is what I do, what I must do, what I was—forgive me—born to do. I can't go back, now. I'm too addicted to whatever it does for me.

But I want to give myself a little space from my manuscript before diving into revisions. I am therefore working on a new project based on an old idea. Not writing, mind you. Merely brainstorming and plotting. Thinking. Daydreaming. I must schedule some time to daydream. At five in the morning. That's worth getting up for, even if it stinks sometimes. (Metaphorically speaking.)


As in just deserts. (And yes, that's how you spell it. I checked.) And this is good deserts for someone who's helped me and countless other writers. Krista Van Dolzer recently signed with Kate Schafer Testerman of kt literary. (Which I guess is also spelled that way. I checked.) Ever since she let me beta read her last manuscript, I've been waiting for this. (Because if it didn't get picked up, it was hopeless for me.)

But there's hope for the rest of us! (I guess. There's no way to check.)


Some of you may remember my very first author interview. No, wait. That was me. You may remember the second interview. That was my brother, Caleb. (Everyone just called him Spendlove all through high school despite his being the sixth Spendlove in the family to go to that school and no one ever calling any of the rest of us by our last name.)

Anyway, he's been writing (and drawing and coloring) a web comic called Bender for a couple of months now. It's a sci-fi adventure, published thrice a week, and it's pretty good. It's always amusing, sometimes really funny, and the artwork's not bad. (Better than Howard Tayler's early work.)

Check it out. (Yes, that's an order—ensign!) Start at the beginning if you like. (He was still figuring out how to scan and color back then.) Here's one of my favorites from recently. Makes me laugh. 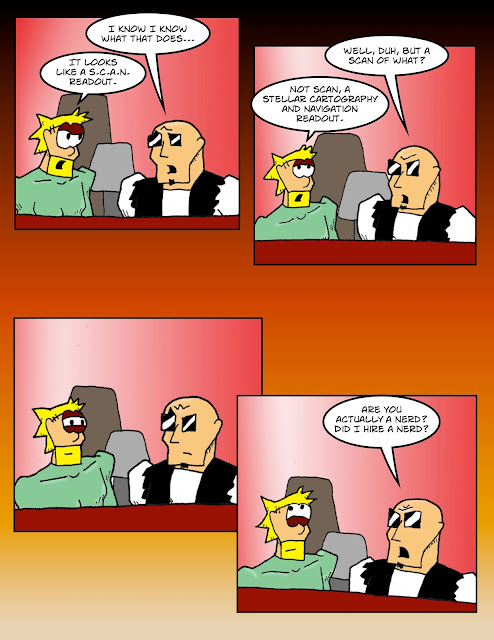