September 09, 2011
This is supposed to be a writing blog, so why am I posting photos? Because sometimes they just fit with what I'm writing.

My novel In Memory has an ensemble cast of characters. (Its reincarnation will split them up into smaller groups, giving each their own entire novel, but that's another story. Pun intended.) Awhile ago, I got an urge to give my blog an In Memory-themed background and pasted silhouettes representing each character onto a photo I had. (Some of you will remember that background.)

Here's the original photo, which I took from the roof of the Doncaster Shopping Centre in suburban Melbourne, Australia in late 2000. It was shot on 35mm film, 200 or 400 ISO. The camera was a compact Pentax with auto focus and exposure. The scan was made from the negative. It's a pretty typical Australian sunset. 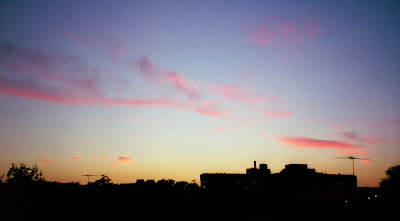 And here's the wallpapered version made with stock-photo silhouettes:

The feel of the sunset was exactly right for the book. The suburban setting was right, too. And I hate putting photos of actual people to my characters, because they're never quite right. The silhouettes work nicely. (Though I did have to swap one of the heads to get the hair right.) The guy on the far left is Peter, the bad guy of the book. His head and shoulders are currently my Twitter profile pic.

I also considered the photo below, which I also shot in Australia with the same camera. This is looking southeast from the highway between Finley and Tocumwal, New South Wales. 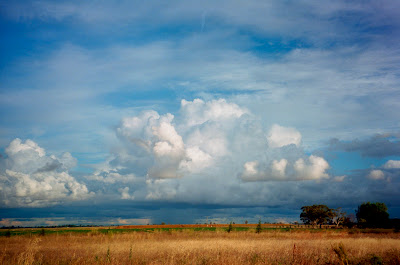 The storm is nice, but the sunset works better with people.